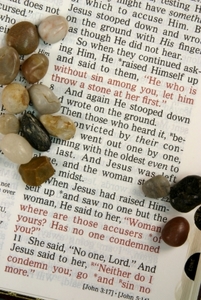 VERSE 1-2: "but Jesus went to the Mount of Olives. Early in the morning he came again to the temple. All the people came to him, and he sat down and taught them."

So, with hardly a break from His grueling schedule, Jesus was back in the temple early in the morning; all the people were coming, and He was continuing to teach.

VERSE 3- 5: "The scribes and the Pharisees brought a woman who had been caught in adultery, and placing her in the midst they said to him, "Teacher, this woman has been caught in the act of adultery. Now in the Law Moses commanded us to stone such women. So what do you say?"

Although the scribes and Pharisees were not wrongly accusing this adulterous woman, their purpose was not to justify the law, if so they would have also brought the man. He had broken the law just as much she had. The law required that both be stoned to death, (Lev. 20:10).

They were only using the woman as a trap, hoping to trick Jesus. The Romans did not permit the Jews to carry out  executions, so:

If He had ordered her stoned, they would have reported Him to the Romans.

If He had said she should not be stoned they would accuse Him of breaking Moses' law.

VERSE 6: "This they said to test him, that they might have some charge to bring against him. Jesus bent down and wrote with his finger on the ground."

We are not told what, if anything, Jesus wrote in the dust with His finger. Some see a connection to when God wrote the Ten Commandments, but there are no scriptures to substantiate this view.

There is no reason to debate what He may have written, or to think it was mistakenly left out of this Scripture.

VERSE 7: "And as they continued to ask him, he stood up and said to them, "Let him who is without sin among you be the first to throw a stone at her."

This is a tremendous statement about being judgmental toward not only the adulterous woman but all sinners. Jesus said that only the sinless were worthy of casting the first stone.

While we as Christians cannot condone sin we are not to be so quick to pass judgment, that is God's role, not ours. We are to pray, offer guidance, and show compassion. This is not always easy but is an example of how the Church is supposed to operate.

VERSES 8-9: "And once more he bent down and wrote on the ground. But when they heard it, they went away one by one, beginning with the older ones, and Jesus was left alone with the woman standing before him."

So, with only the adulterous woman standing before Him, Jesus once again seemed to write something on the ground, and again we are not told what it may have been.

When Jesus said that only the ones without sin were worthy to cast the first stone at the adulterous woman, they all went away, one by one, (beginning with the older ones).

Don't you think they all knew they were in the wrong and felt convicted by the Words and presence of Jesus? Perhaps in the same way the temple guards in Chapter seven had said, "No man ever spoke like this before."

Do you think the older men were wiser in Scripture, or possibly more aware of their sins than the younger? Perhaps both?

This is an example of how Jesus forgives all sin. He did not condemn the adulterous woman to death; nor did he say that since He had come her adulterous deed was no longer a sin.

On the contrary, He openly revealed her sin when He told her to, "Go, and sin no more."

Based upon the Law of God, this woman had committed a sin that required the death sentence. However, Jesus, who was also God, had the authority to forgive this woman's sin, which He did.

Still, the death sentence for this woman was a Commandment of God that had to be carried out, and not even Jesus could break the Commandments.

So, some think only a few days later, Jesus died in her place on the cross fulfilling the requirements of the Law on her behalf.

The adulterous woman's sin was forgiven by Almighty God, never to be remembered again. (Complete forgiveness and eternal life with Him). What a wonderful plan and Savior!

Jesus not only died for the sins of this woman. Anyone who will accept Him as their Savior can receive complete forgiveness and eternal life. Like the adulterous woman, His death on the cross fulfilled the Law for all who will Follow Him.

Our sins, like those of the adulterous woman demand the death penalty, but, as in this beautiful song:

"Jesus Paid it All!"

Our Next Study:
"I AM the Light of the World"

"After this message I received revelation and my spirit was lifted. More anointing in your ministry in Jesus name."
G: Nigeria