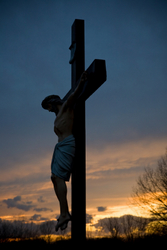 "It is finished!" Jesus had followed and executed the mission assigned to Him by His Father, the Almighty God.

The Death of Jesus on the Cross

Verse 28: "After this, Jesus, knowing that all was now finished, said to fulfill the Scripture, "I thirst."

"I thirst," fulfills still another Prophecy, offering more proof that He was indeed the Messiah.

Verse 29: "A jar full of sour wine stood there, so they put a sponge full of the sour wine on a hyssop branch and held it to his mouth." (HIH-suhp)or (HiH-soph)

The sour wine was very likely the tart wine of the Roman Soldiers. It was also given to the person suffering a slow tormented death in crucifixion.

The wine offered to Jesus should not be confused with the stupefying potion of vinegar and gall in (Mat 27:34 and Mark 15:23).

Although of little importance, there has been a variety of conjectures concerning exactly what type of reed, stick or stalk, was used to lift the sponge with sour wine to Jesus. According to John's Gospel, the sponge was lifted on the stalk of the hyssop.

The hyssop is thought to have been used only to bind the sponge to the stalk. As a matter of interest, the hyssop was frequently used in the Old Testament in rites of purification.

Verse 30: "When Jesus had received the sour wine, he said, "It is finished," and he bowed his head and gave up his spirit."

On the previous night, Jesus had said to His disciples,
"I came from the Father and have come into the world, and now I am leaving the world and going to the Father," (John 16:28).

Through the death of Jesus, mankind was reconciled to God, opening the "Holy of Holies" and the "Kingdom of Heaven" to every believing soul.

Jesus’ Side Is Pierced

Verses 31-32: "Since it was the day of Preparation, and so that the bodies would not remain on the cross on the Sabbath (for that Sabbath was a high day), the Jews asked Pilate that their legs might be broken and that they might be taken away. 32So the soldiers came and broke the legs of the first, and of the other who had been crucified with him."

The Jewish law, in Deut 21:22-23, did not allow the bodies of criminals to hang on the cross all night; nor did they wish to profane the Sabbath by taking them down on that day.

Breaking the legs or other bones of criminals upon the cross was common custom, as it would rush their death and bring a speedy end to their suffering. It was also a way to comply with the Jewish Law by making sure the bodies would be removed before the Passover began.

Verses 33-34: "But when they came to Jesus and saw that he was already dead, they did not break his legs. 34But one of the soldiers pierced his side with a spear, and at once there came out blood and water."

Though unverified, according to some Roman Catholic writers, the name of the soldier who pierced the Lord's side was "Longinus."

According to their writings, it was he who, after witnessing the death of Jesus, said, "Truly this was the Son of God." As a result, he was converted and later traveled to Cappadocia, where he preached the Gospel and was martyred.

It is not known which side of Jesus the soldiers pierced and is of no importance; else this would have been revealed by the Holy Spirit.

His legs were not broken, so the piercing did take place. The Law required criminals to remain on the cross until they died. Jesus was pierced to satisfy this law.


Verse 35: "He who saw it has borne witness— his testimony is true, and he knows that he is telling the truth— that you also may believe."

John reminds us that this is his graphic "eye-witness" account of the death of Jesus, not heresy.

Verse 36: "For these things took place that the Scripture might be fulfilled: "Not one of his bones will be broken." 37And again another Scripture says, "They will look on him whom they have pierced."

One more among many prophesies fulfilled:

All things are possible with our omnipotent God. It is amazing how the following prophecy, confirmed by the "Dead Sea Scrolls," and made some 1440 years earlier, was fulfilled:

Many believe the death of Jesus occurred just as the lambs for the Passover meal were slain; at precisely the right time, as the Father had planned.

This concludes our study of, "The Death of Jesus on the Cross."

The Burial of Jesus

The Death of Jesus


"As an Amazon Associate I earn from qualifying purchases."