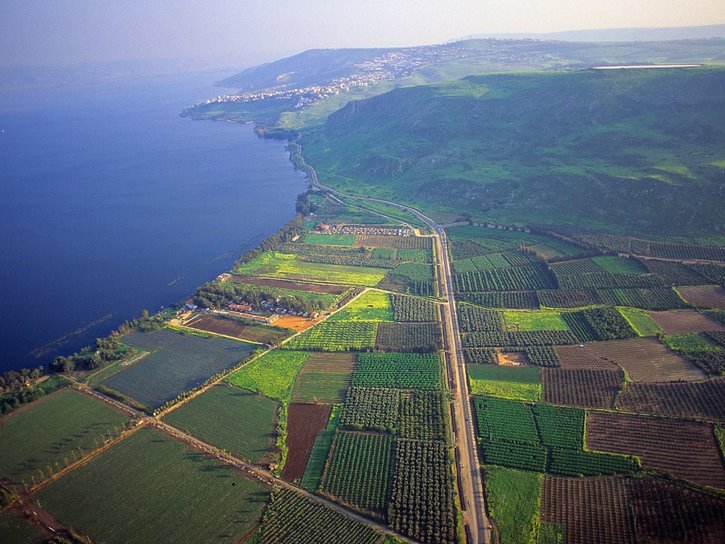 A magnificient aerial view of the Sea of Galilee with the city of Tiberias in the background. (Picture by H. Isahar,)

The Sea of Galilee, also know as the Sea of Tiberias, is located in the region of northern Israel, It is 15 miles long, 8 miles across at its widest with the deepest point being 150 feet. At 686 feet below sea level it is said to be the lowest fresh water lake on earth.

The Sea of Galilee, said to be more accurately described as a lake, is fed partly by underground springs, but it's main source is the Jordan River which enters from the north and continues out in the south, then on southward to the Dead Sea.

Fishing has always been a major industry on the Sea of Galilee and is mentioned quite often in the four gospels. According to Matthew, Mark, Luke, and John much of Jesus’ ministry took place in the villages by the Sea of Galilee, especially Capernaum and Bethsaida.

The normally calm Sea of Galilee can become quickly transformed by violent storms funneled through the east-west Hill country of Galilee. The most violent of these storms come off the hills of the Golan Heights. These winds can be deadly to fishermen. In 1992 a storm sent waves ten feet high crashing into downtown Tiberias. Jesus Feeds the Five Thousand Home

"Lets Teach Our Children to Love"

Why is it so difficult for our educators and society, in general, to understand that love and respect for one another taught from a young age can solve much of the world's hostility and social problems!

Love is the answer!