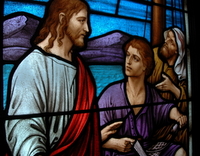 Verse 1: "On the third day there was a wedding at Cana in Galilee, and the mother of Jesus was there."

Most scholars believe Khirbet Kana (over eight miles from Nazareth), is the location of "Cana."

Verse 2: "Jesus also was invited to the wedding with his disciples."

Weddings were weeklong festivals with banquets with many distinguished guests and prominent teachers.

The source of invitation cannot be known, but Jesus, His Mother, and His disciples, were invited and they attended.

Verse 3: "When the wine ran out, the mother of Jesus said to him, "They have no wine."

Many times the whole town would attend weddings. It was considered an insult to refuse an invitation.

Jesus' mother knowing He could perform the miracle of creating wine out of nothing apparently hoped her remark would enlist His aid.

Verse 4: "And Jesus said to her, "Woman, what does this have to do with me? My hour has not yet come."

"Woman" was a respectful address and was used much in the same as ("Ma'am") in our day; however it was not a customary expression for ones' mother. Most believe Jesus' statement was intended to establish a polite distance. Nevertheless, a mild and respectful reproof of his mother cannot be separated from this.

Verse 5: "His mother said to the servants, "Do whatever he tells you."

Mary left the outcome in Jesus' hands and at the same time, did not take no for an answer. She was confident Jesus would handle the situation in the best possible manner. (Many ancient bible teachers used Mary's act of confidence as a demonstration of "strong faith.")

Verses 6-7: "Now there were six stone water jars there for the Jewish rites of purification, each holding twenty or thirty gallons. 7Jesus said to the servants, "Fill the jars with water." And they filled them up to the brim."

The six stone water jars, holding 20-30 gallons each, were being reserved for ritual purposes and would have been enough to fill a Jewish immersion pool used for ceremonial purification.

The servants obeyed and filled the water pots to the brim.

"Everyone serves the good wine first, and when people have drunk freely, then the poor wine. But you have kept the good wine until now."

The miracle of Jesus turns water into wine, is seen as a literal creative act of God incarnate.

The "Master of the banquet" was considered a position of honor. The Jewish teachers disapproved of drunkenness at weddings, so the responsibility of the Master of the banquet was not only to preside over the entertainment but also to control the level of dilution for the wine. The alcohol level of new wine was watered down, with two to three parts water to one part wine. In this light, he too may have been partly responsible for the host's running out of wine.

People sometimes wrongly expect life with God to be boring and dull. Just as the wine Jesus made was the best, life with Him is exciting and far better than on our own.

Verse 11: "This, the first of his signs, Jesus did at Cana in Galilee, and manifested his glory. And his disciples believed in him."

Jesus turns water into wine is an introduction to all the other miracles performed by Jesus.

"And His disciples believed in Him," as with His Followers today, there was new faith and hope, bonding and excitement with His disciples that would later explode into total dedication to Him in all circumstances.

This concludes our study of, "Jesus Turns Water into Wine"

In our next study:

The Commandments of Jesus