(The Woman at the Well Part 2)
In Part 1 Jesus and His disciples were en route from Aenon, just north of the Dead Sea where they had been baptizing, to somewhere in Galilee. Their route required them to pass through the countryside of Samaria.

There was a Woman in Samaria who was about to meet the Master, a meeting that would change her life forever.

Although the other women came to draw water in the cool of the day, this woman came in the middle of the day when she would avoid other people. However, on that particular day, Jesus was there waiting for her.

Jesus had told the "woman at the well" that He was the Messiah. He then offered her the  "Well Spring of Water that springs up into eternal life," and she accepted.

Jesus spoke a lot about sowing seed, and seed time and harvest. Our previous study gave examples of sowing the Word; this one is about Reaping. 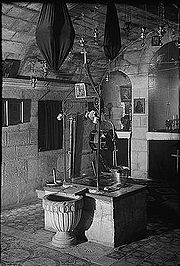 Jacob's well is one of the few sites in Palestine about which there is no dispute. The Jews, Muslims, and Christians agree that this is the original well. Jacob dug it, and hence its name, in the "parcel of ground" which he purchased from the sons of Hamor (Gen. 33:19).

It still exists but contains very little water, which fluctuates with the amount of rain. It is about two miles southeast of the town of Shechem. It is about 9 feet in diameter and about 75 feet in depth, but in ancient times was no doubt much deeper.

Visitors have to go down steps about 15 or 20 feet under the ground.

Verse 27: Just then his disciples came back. They marveled that he was talking with a woman, but no one said, "What do you seek?" or, "Why are you talking with her?"

The disciples trusted Jesus enough not to ask about the situation.

The Jewish men were taught, and even warned, not to talk to women; it was a part of their training; (Some rabbis added, even with one's own wife).

Not talking to women was an attempt to avoid temptation and the appearance of sin. Does this not reveal their desperation to attain perfection?

Verses 28-30: "So the woman left her water jar and went away into town and said to the people, 29"Come, see a man who told me all that I ever did. Can this be the Christ?" "30They went out of the town and were coming to him.

So, she left her water containers, and we aren't told if she actually drew water out of the well, or if she gave Jesus a drink.  Do you think she did?  I hope so.

What an incredible honor, to be the one to give Jesus a drink of water! Yet, Jesus had once said, “Truly, I say to you, as you did it to one of the least of these my brothers, you did it to me.” (Matt 25:40).

She had suddenly discovered that neither her water Jars nor the water in the old well, were as important as " the water that wells up into eternal life," the kind of water Jesus had to offer.

She had gone to tell the others about Jesus.
The Samaritan's were a lot like the Jews in that, they wouldn't have had much regard for the witness of any woman, and the witness of an adulteress would have been worthless. How ironic that she became one of the very first witnesses for Jesus.

We can easily see a dramatic change in this Samaritan woman at the well.  She had taken great measures to avoid others; yet, here we see her running to town, telling everyone to...,

"Come see a man whom must be the Messiah..."

We can still see that change in people today. There is just something about a new convert. They are on fire for the Lord,  and some of the greatest witnesses for Christ.

Verse 31-32: Meanwhile the disciples were urging him, saying, "Rabbi, eat." 32But he said to them, "I have food to eat that you do not know about."

Verse 33:  So the disciples said to one another, "Has anyone brought him something to eat?"
|
Verse 34: Jesus said to them, "My food is to do the will of him who sent me and to accomplish his work.

According to the (IVP) background Commentary, Ancient teachers sometimes used food as a metaphor for spiritual food. Jesus was clearly saying He had received strength or sustenance from God.

The Work of God:
It is easy to see that Jesus was intent on finishing the work God had sent Him to do. At one point in His ministry, He said,

I wonder what the Father has been doing for the past few thousand years? The Bible tells us that the earth and the heavens reflect His glory. Could He have something to do with 325 billion, and counting, new galaxies the scientist say are still developing?

VERSE 35: Do you not say, 'There are yet four months, then comes the harvest'? Look, I tell you, lift up your eyes, and see that the fields are white for harvest.

Most see this as a prophetic statement concerning the future, with the fields ready for harvest, (Jesus talked a lot about seed time and harvest).

In our day, don’t you think Jesus would say, “Open your eyes, see what’s happening, the fields are white for harvest."

Others think that when He said, "lift up your eyes and see that the fields are white for harvest,"  He may have been speaking of the Samaritans, who could perhaps be seen in the distance, coming to Jesus in response to the woman's testimony.

VERSE 36: "Already the one who reaps is receiving wages and gathering fruit for eternal life, so that sewer and reaper may rejoice together."

Of all the joys associated with the Christian life, there is none greater than leading a lost soul to Christ.

Verse 37: "For here the saying holds true, One sows and another reaps."

Verse 38: I sent you to reap that for which you did not labor. Others have labored, and you have entered into their labor."

Both Jesus and the Samaritan woman sow, and the disciples see the harvest. I am reminded of the prophets in the Old Testament, who down through the centuries laid the groundwork in preparation for the Messiah; (were they not also sowers for this harvest?)

Verse 39: Many Samaritans from that town believed in him because of the woman’s testimony, "He told me all that I ever did."

Then we are told:
Verses 40-41: "So when the Samaritans came to him, they asked him to stay with them, and he stayed there two days. 41And many more believed because of his word."

The Samaritan invitation to stay there for two days contrasts His experience in some of the Jewish towns. On one occasion He cast demons out of two men who were living in a cemetery.

The demons went into some nearby pigs, driving them over a cliff where they were killed; and the people ordered Him to leave. It seems they would rather have the demons (Matt 8:28-34).

One can only wonder where the demons went when they left the pigs. I would not have wanted to live in that town afterward.

From the "IVP background commentary,"  "For Jesus to lodge there, eating Samaritan food and teaching Samaritans,  might be compared to defying segregation in the United States during the 1950's, or apartheid in South Africa in the 1980s --shocking, extremely difficult, and somewhat dangerous. Jesus is more concerned with people than with custom."

THE LAST VERSE IN THIS STUDY:

Verse 42: They said to the woman, "It is no longer because of what you said that we believe, for we have heard for ourselves, and we know that this is indeed the Savior of the world."

She brought the people to Jesus, but they believed because of Him. Isn't that about all that is expected of us, to introduce others to Jesus?

And, I  couldn't help but wonder how many millions this Samaritan Woman by this Well may have witnessed to over the centuries.

This message of the Samaritan woman by the well of Jacob is an excellent example of God's love, a  love that accepts us where we are.

Jesus, the King of kings, literally went out of His way to find and to offer this Samaritan woman a place in His kingdom.

This woman without a name, who doesn’t appear again in Scripture, was an outcast in her own society. Jesus reached out to her, and she reached back.

And Jesus didn't Forget the Samaritans but sent the Apostles to Minister to them.

IN ACTS 8,  "Philip went down to the city of Samaria and proclaimed to them the Christ. 6 And the crowds with one accord paid attention to what was being said by Philip when they heard him and saw the signs that he did.

7For unclean spirits, crying out with a loud voice, came out of many who had them, and many who were paralyzed or lame were healed. 8So there was much joy in that city."

Evidently, Philip had a broad ministry that included,  delivering the plan of salvation, healing, and setting the captives free.

And, in verse 14, "Now when the apostles at Jerusalem heard that Samaria had received the word of God, they sent to them Peter and John, 15who came down and prayed for them that they might receive the Holy Spirit,

16for he had not yet fallen on any of them, but they had only been baptized in the name of the Lord Jesus. 17Then they laid their hands on them and they received the Holy Spirit."

No wonder this is one of the all-time favorite New Testament Bible Stories/Scriptures.


This concludes our study of the Woman at the Well Part 2.

IN OUR NEXT STUDY JESUS HEALS A CRIPPLE BY THE

Dear Sir/Madam, I found the study very powerful and need to share with other women about the "woman at the well."  I am so blessed by the Word.

May God continue to bless your ministry abundantly. Sincerely, Emily.

Woman at the Well Part 2

"Lets Teach Our Children to Love"

Why is it so difficult for our educators and society, in general, to understand that love and respect for one another taught from a young age can solve much of the world's hostility and social problems!

Love is the answer!