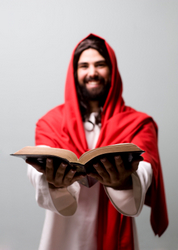 This study begins with:

Can this be the Christ

VERSES 25-27: "Some of the people of Jerusalem therefore said, Is not this the man whom they seek to kill? And here he is, speaking openly, and they say nothing to him!
Can it be that the authorities really know that this is the Christ? But we know where this man comes from, and when the Christ appears, no one will know where he comes from."

The people were confused, and asking,

"If Jesus is a deceiver, why haven't the authorities arrested Him; could it be because they know He is the Christ?"

On the other hand, they said, "We know where this man comes from," but, according to Jewish teaching no one would know this about the Messiah.

VERSES 28: "So Jesus proclaimed, as he taught in the temple, You know me, and you know where I come from? But I have not come of my own accord. He who sent me is true, and him you do not know."

Jesus might have said, Yes, you know what town I am from, but God is the One who sent me, so you apparently do not know Him either.

The expression used here "sent" means that Jesus was a commissioned agent: An authorized representative of the Father.

He was the Messiah, "God the Son."  God had sent Him from Heaven to save the world.

VERSE 30-31: "So they were seeking to arrest him, but no one laid a hand on him, because his hour had not yet come. Yet many of the people believed in him. They said, When the Christ appears, will he do more signs than this man has done?"

The authorities were now actively trying to find Jesus, so they could place Him under arrest, but it didn't happen, because the time appointed by God for His execution had not yet come."

Although the outlook for Jesus appears bleak, the following events show that God had been in total control from the start.

They had asked: "will he do more signs than this man has done."

According to "Jewish tradition," (but not Scripture) the Messiah would not be known as a miracle worker but could only do the works of "Moses."

You may remember that when Jesus fed the five thousand on the shores of Galilee, they had recognized him as being this prophet.

VERSE 32: - "The Pharisees heard the crowd muttering these things about him, and the chief priests and Pharisees sent officers to arrest him."

"Officers being sent to arrest Jesus" could only mean that a meeting of the Sanhedrin, (Jewish Law officials, Judges) and the Pharisees had been held, and a warrant issued for His arrest.

The Pharisees had no authority to arrest anyone, but the chief priests did.

As a matter of interest:

History shows that even decades later, (after 70 A.D.), the main Palestinian opposition to the Christians came from the Pharisees.

VERSE 33: "Jesus then said, I will be with you a little longer, and then I am going to him who sent me.

Jesus was looking beyond His crucifixion to the time when His divine mission would be complete, and He would return to His home in Heaven.

In saying, "I will be with you a little longer," He was informing them that their time was running short.

Don't you wonder what He was feeling and thinking? Perhaps, "I can not wait to get back home," or; "There's not much time left, and many are going to miss out?"

Their time with Him was running out; He would soon be leaving. "Where I am you cannot come" was still another attempt to help them understand who He was. (He was "The Son of God," and would soon be back home in Heaven)

VERSE 35: - "The Jews said to one another, Where does this man intend to go that we will not find him? Does he intend to go to the Dispersion among the Greeks and teach the Greeks?"

Here again, the people were unable or unwilling to understand.

In the "dispersion," some of the Jews were scattered, dispersed, or mixed among the Greeks, so they were wondering if Jesus might use these alien Jews as a base of operation to reach the Gentiles.

The irony is that, after Jesus' Ascension, this did happen to some degree, in the Book of "Acts. "

VERSE 36: - "What does he mean by saying, You will seek me and you will not find me, and, Where I am you cannot come?"

They still did not realize that Jesus was God; nor could they understand, that soon He would no longer be with them, because He would be back in Heaven.

VERSES 37-38: - "On the last day of the feast, the great day, Jesus stood up and cried out, If anyone thirsts, let him come to me and drink. Whoever believes in me, as the Scripture has said, 'Out of his heart will flow rivers of living water."

Jesus was using water metaphorically with the Spirit.

For the first seven days of the feast, priest, marching in processions, would carry water from the Pool of Siloam to the temple and pour it at the base of the altar.

The last day of the feast included a "water ritual," which was related to the need for rain during the following year.

But Jesus was using the idea of thirst in a Spiritual sense.

Water usually symbolized, Torah, the Law, or wisdom, in the Jewish texts; but John used it to mean the Spirit, as in Isaiah, (almost 700 years earlier):

"For I will pour water on the thirsty land, and streams on the dry ground; I will pour out my Spirit on your offspring, and my blessing on your descendants." (Isaiah 44:3),

Jesus had said something very similar to the Samaritan Woman at the well:

In saying, "Whoever believes in me," makes it clear that His Spiritual water is available only to Believers.

VERSE 39: - "Now this he said about the Spirit, whom those who believed in him were to receive, for as yet the Spirit had not been given, because Jesus was not yet glorified."

He was speaking of the future. After the crucifixion when Jesus would be raised to honor was a time described by John as, a time of "Glorification,"

In the following verses His answer to their question of, "Can this be the Christ?" only leads to further discussion.

Division Among the People

VERSES 40: - "When they heard these words, some of the people said, This really is the Prophet."

VERSE 41: - "Others said, "This is the Christ. But some said, "Is the Christ to come from Galilee?

Some were still saying, "Can this be the Christ," but at this point isn't it encouraging to know that at least some were saying, "This is the Christ!"

VERSE 42: - "Has not the Scripture said that the Christ comes from the offspring of David, and comes from Bethlehem, the village where David was?"

The people knew that the prophets had said the Messiah would come from the lineage of David, as well as the city of David, (Bethlehem). Evidently, they were not aware that Jesus had been born in Bethlehem.

"And the angel said to them, "Fear not, for behold, I bring you good news of great joy that will be for all the people. For unto you is born this day in the city of David a Savior, who is Christ the Lord," (Luke 12:10-11).

VERSE 43-44: "So there was a division among the people over him. Some of them wanted to arrest him, but no one laid hands on him.

Three times in this chapter, their desire to arrest Jesus had ended in failure.


VERSE 45-46: - "The officers then came to the chief priests and Pharisees, who said to them, Why did you not bring him?" The officers answered, "No one ever spoke like this man!"

These officers had failed to carry out their orders, (This was a serious offense).

There are two opinions on why the officers did not to arrest Jesus:

1: The officers were more than likely, "Temple Guards," which would mean they were trained Levites.

It was customary for teachers to come to the temple to speak or teach. Listening to public speakers was a form of entertainment as well as of learning. A powerful and wise speech was highly regarded.

Being continually in or near the temple, these guards would have heard many teachers, including the most influential scholars in the land.

They knew and understood the Scriptures and would have recognized the truth in Jesus' teaching; and they said, "no one ever spoke like this man."

2: There was a fear among the Jewish leaders and authorities that the people who believed in Jesus might rebel. The Romans would put down the uprising, and possibly strip the officials of their positions.

VERSES 47-48: - "The Pharisees answered them, Have you also been deceived? 48 Have any of the authorities or the Pharisees believed in him?

It seems the Pharisees were thoughtless, arrogant, and rude to everyone. They were accustomed to having the last word in the Law, even with the temple guards.

Then the Pharisees said:

VERSE 49: - "But this crowd that does not know the law is accursed."

Still more arrogance. The trained rabbis in that time often looked down on the people of the land.

They believed, and reasonably so, that one could not live the law without first understanding it, and they did not think the people of the land had this ability.

But the "Temple Guards," were Levites who had also been trained in the Law.

VERSE 50-51: - "Nicodemus, who had gone to him before, and who was one of them, said to them, "Does our law judge a man without first giving him a hearing and learning what he does?"

So, here again is Nicodemus. In the third chapter of this study, Nicodemus had come to question Jesus in the night, and Jesus had taught him the meaning of being, "Born Again."

And here he is again, this time publicly defending Jesus. He tells the Pharisees that they are not following the actual intent and spirit of the Law. (also, very similar to what Jesus had said to them).

VERSE 52: - "They replied, Are you from Galilee too? Search and see that no prophet arises from Galilee"

They are asking Nicodemus if he was also from the wrong side of town, (Are you also from Galilee)?

Although Jesus was born in Bethlehem, He grew up and lived most of His adult life in Galilee.

To the Pharisees, it was perhaps more of a regional preference than knowledge of the Scriptures.

It was established by later rabbis that there had been prophets from every tribe in Galilee.

So, the feast is over, and they all go home, but we know that Jesus is not through trying.

This concludes our study of "Can this be the Christ."

About our next study:

The Scripture containing, "The Woman Taken in Adultery" was not in some manuscripts, but is included in the ESV, (the one we are using in this study); also, in the KJV, NKJV, ASV, and NIV; and it fits with Jesus' other teachings.

So, bearing that in mind:

The Trusting in Jesus, Home Page

"Can This be the Christ" Form