"The Crucifixion of Jesus"
And the Via Dolorosa Pilgrimage
John 19:17-27  -  Bible Study 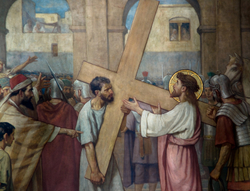 The Via Dolorosa, Latin for "Way of Grief," is the route where Jesus carried His cross, from the House of Pilate to the Crucifixion at Golgotha, the "Place of a Skull."

The Via Dolorosa pilgrimage has been followed since early Christianity, beginning soon after Constantine legalized Christianity in the third century.

Many Christians have taken the walk along the "Via Dolorosa."

Verse 17: "and he went out, bearing his own cross, to the place called The Place of a Skull, which in Aramaic is called Golgotha.

Over the centuries the path has changed several times. Today, the main route of the Via Dolorosa has 14 stations along the way.

Although the route has changed, for most pilgrims, the exact location of each landmark along the Via Dolorosa is of little importance. The pilgrimage has profound meaning due to its proximity to the original events, and the reflection upon them along the way to the crucifixion.

It was not enough to kill the person; humiliation was also a part of the punishment. The victim was usually naked for both the procession and the execution.

The "Place of the Skull," or "Golgotha" was located outside the city wall, perhaps one thousand feet from Herod's palace. It was customary for the Romans and the Jews to carry out the crucifixion outside the towns. The Romans liked the hill because its visibility could be used as an example to the people

Verse 18: "There they crucified him, and with him two others, one on either side, and Jesus between them."

Several stakes, about ten feet high, stood permanently in Golgotha, ready to be reused whenever a crucifixion occurred.

On the top of the stake, or slightly below the top, was a groove into which the horizontal beam of the cross would be inserted after the prisoner had been fastened to it with ropes or nails. This is where Jesus was crucified. ("IVP Bible Background Commentary")

Verses 19-20: "Pilate also wrote an inscription and put it on the cross. It read, "Jesus of Nazareth, the King of the Jews. "Many of the Jews read this inscription, for the place where Jesus was crucified was near the city, and it was written in Aramaic, in Latin, and in Greek."

It was not unusual for the condemned man to be forced to carry a title, stating the reason for his crucifixion. The title above Jesus' cross - written in the three most commonly spoke languages of that area, read, "JESUS of NAZARETH, THE KING OF THE JEWS."

That was the title Pilate insisted upon; however, Jesus' claim to be "King of the Jews" was not a capital crime, so the official charge was, "High Treason against the Emperor."

Pilate no longer had to be concerned with mob unrest, or of a complaint to the emperor 'Tiberius,' by the Jews, concerning Jesus.

He did not like the Jewish leaders, and perhaps, none of the Jews. The Jews had blackmailed him into doing their dirty work in crucifying Jesus with no legal reason and caused Pilate to retaliate.

In an act of revenge, Pilate had the title, "King of the Jews" placed on Jesus' cross. He later had a coin minted with the image of one of the most hated Roman leaders, "Tiberius," bearing the augur's wand, a pagan symbol that was despised by the Jews.

There was a city on the western shores of the "Sea of Galilee" named Tiberias after the leader, "Tiberius." It was a large, wicked, Greek oriented City, in which most Jews would not enter.

Verses 23-24: "When the soldiers had crucified Jesus, they took his garments and divided them into four parts, one part for each soldier; also his tunic. But the tunic was seamless, woven in one piece from top to bottom, 24so they said to one another, "Let us not tear it, but cast lots for it to see whose it shall be." This was to fulfill the

Roman law granted the soldiers the right to the clothes the condemned man was wearing.

A military unit was eight soldiers, who would share living quarters, (tent). A 'half unit' would be four soldiers, the usual number assigned to crucifixions, and the reason for the clothes being divided into four parts.

"They divided my garments among them and for my clothing they cast lots." So, the soldiers did these things," (Psalm 22:18), fulfilling the prophecy of Psalm 22:18.

Verse 25: "but standing by the cross of Jesus were his mother and his mother’s sister, Mary the wife of Clopas, and Mary Magdalene."

By His cross was His mother, an unnamed aunt, (His mother's sister), Mary the wife of Clopas, (believed to be a brother to Joseph), and Mary Magdalene, who became a loyal Follower of Jesus after He had cast many demons from her.

The 'disciple whom he loved was clearly, "John," the author of this Gospel. John never refers to himself directly, only in the third person.

Jesus, being the oldest, would have had the responsibility of caring for his mother, then later, his younger brothers.

Jesus' statement in front of the witnesses was binding and placed His mother under His disciple's provision and care.

For a disciple to be asked to care for his teacher's family was a great honor.  Mary was possibly in her mid to late forties, a widow, living in a society where women earned very little money.

This concludes our study of, "The Crucifixion of Jesus,"

Our Next Study Is:

The Death of Jesus on the Cross.