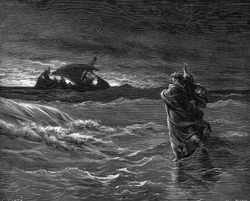 This is the Apostle John's account of, Jesus Walks on Water. The Holy Spirit presented bits and pieces of information of this event from each of the four gospels.

The most noticeable difference in the accounts of Jesus walks on water, is that although Peter isn't mentioned in the Gospel of John, in Matthew, he gets out of the boat and walks on the water to meet Jesus, (Matt 14:28-32).

It seems to be the same occurrence because Matthew, Mark, and John all show it immediately after He feeds the five thousand. The account of, "Jesus Walking on Water" isn't recorded at all in Luke.

After Jesus finished with the feeding of the five thousand, He slipped away; because some of the people wanted to force Him to be King.

He had told the disciples to go on ahead of Him to Capernaum, then went up on the mountain by Himself.

VERSES 16-17: "When evening came, his disciples went down to the sea, got into a boat, and started across the sea to Capernaum. It was now dark, and Jesus had not yet come to them."

Capernaum is a few miles to the north of Tiberias, on the northwestern tip of the Sea of Galilee.

Jesus and the disciples had crossed over to the other side of the Sea of Galilee that morning, it had been a long day and was now dark, and the disciples, in obedience to Jesus, were returning without Him.

To Jesus and the disciples, Capernaum wasn't just another place to go. According to the "Jewish Virtual Library," it was where "Jesus, (and several disciples) lived during much of His ministry.

These disciples were Simon Peter - his brother Andrew, James son of Zebedee, his brother John - and Matthew.

According to historians, Capernaum was abandoned in the 7th century and rediscovered through archeology. There, underneath a modern church, are fifth and fourth-century churches, and, the first century House where Peter lived.

Capernaum is one of three
cities cursed by Jesus.

Capernaum: "And you, Capernaum, will you be lifted up to the skies? No, you will go down to the depths. If the miracles that were performed in you had been performed in Sodom, it would have remained to this day. But I tell you that it will be more bearable for Sodom on the day of judgment than for you."(Matt. 11:23-24).

Earlier in the day, Jesus had fed the five thousand. Darkness had fallen, and the disciples were on their way back to Capernaum. This is when Jesus walks on water.

Verse 18: "The sea became rough because a strong wind was blowing."

It had been a long and challenging day for the disciples. They had crossed the sea earlier, then walked up the mountain where Jesus miraculously multiplied food. The disciples had distributed this food to an estimated multitude of more than twenty thousand.

Now, darkness had fallen, and they were rowing back across the sea.

Verse 19: " When they had rowed about three or four miles, they saw Jesus walking on the sea and coming near the boat, and they were frightened."

Sometimes problems catch us by surprise, so here they were, in a boat, and other accounts tell us there was a storm.

Most boats of that time had sails, but sails wouldn't be any good in a storm. They were in this little boat, rowing, in what is estimated to be the middle of the sea.

And it was dark
All our storms seem worse at night,  don't they? In the second part of the verse they see Jesus coming toward them on the water, but they didn't know it was Jesus. They thought it was an apparition.

Jesus spoke this in a way that the disciples would recognize Him. But He was walking on water, (a striking display of His deity).

According to translators, instead of saying, "It is I," Jesus could have also been saying, "This is the 'I Am.'"

Several Old Testament prophets parted the water, (Moses, Joshua, Elijah, and Elisha), but, this is the only record of anyone walking on water.

Verse 21: "Then they were glad to take him into the boat, and immediately the boat was at the land to which they were going."

They surely must have been glad to have Jesus in that boat!

Then, "immediately they were at the shore."

After all the disciples had witnessed that day, I wonder if they were even surprised that they "immediately" reached their destination.

Jesus, walking on water and multiplying food, proclaimed that He is surely the "Supreme Authority" of all the universe.

His Disciples didn't know what to expect next. Abandoning their earthly pursuits; they followed wherever He led and experienced one miracle after another.

What an exciting life! Do you think that's the way He intended for us to live? I believe it is.

Something to remember: The same "John" writing this Gospel was in that boat, and this is his eyewitness report. (testimony)

This concludes our study of "Jesus Walks on Water."

|
Do you think Jesus has a sense of humor?
In our next study,  the people Jesus had fed were still on the other side of the sea. They had seen the disciples leave without Him, (in the only boat)  and were looking for Him.

They didn't know about Jesus' "divine mode of transportation."

On to Our Next Study :

"Jesus is the Bread of Life"

Matthew: United States
Thank you for this bible study, how interesting to have learned about Jesus cursing these three different areas and how He related sodom destruction more bearable than capernaum destruction?