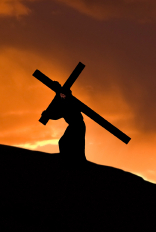 The soldiers mocked and taunted Jesus. The crown of thorns was perhaps from the branches of the thorny acanthus shrub, or the date palm. The thorns would have scraped inward, drawing blood from Jesus' scalp.

The Soldiers Mock and Beat Jesus

Verse 1: "Then Pilate took Jesus and flogged him."

The soldiers mocked Jesus and administered His punishment.

The Jewish Law permitted only thirty-nine lashes, but the Romans allowed scourging until the soldier grew tired.
(Bible Background Commentary)

Men were known to die from flogging, but the beating of Jesus, is thought to have been an effort by Pilate, to substitute a lighter penalty than the Jews demanded, but his tactics failed.

The scourging of Jesus fulfilled the prophecy, "By his stripes we are healed," (Isaiah 53:5).


The Crown of Thorns:

Verse 2: "And the soldiers twisted together a crown of thorns and put it on his head and arrayed him in a purple robe."

The soldiers mocked and taunted Jesus. The crown of thorns was perhaps from the branches of the thorny acanthus shrub or the date palm. The thorns would have scraped inward, drawing blood from Jesus' scalp.

Some think the purple robe, was a three-color fabric, suggesting royalty. Crimson, scarlet, and purple were the colors of the veil of the temple, and very appropriate for Jesus on the day of His death.

Again, and again, the soldiers mocked Jesus. Hail is sarcasm taken from the customary way of greeting the Roman emperor, as in, "Hail Caesar!"


Verse 4: "Pilate went out again and said to them, "See, I am bringing him out to you that you may know that I find no guilt in him."

Pilate confronted the Jews in an attempt to release Jesus. He had rendered his verdict as "not guilty," which under normal circumstances would stand. But the people, consumed with satanic hatred, only grew stronger in their determination to have Him crucified.


Verse 5: "So Jesus came out, wearing the crown of thorns and the purple robe. Pilate said to them, "Behold the man!"

In saying, "Behold the man," Pilate's intent was more of ridicule and pity than honor.

If Pilate had any doubts before, he certainly knew now, that there were no legal charges against Jesus. There was no reason to charge Him with anything

Once again Pilate confronted the Jews as he presented them with Jesus, now beaten, mocked, wearing a crown of thorns and a purple robe.

Verse 6: "When the chief priests and the officers saw him, they cried out, "Crucify him, crucify him!" Pilate said to them, "Take him yourselves and crucify him, for I find no guilt in him."

The Chief Priests and officers could produce no legal reason for having Jesus put to death; instead, His innocence had been established.

Pilate, knowing that Jesus was innocent, said You crucify him and let the blood be on your hands, for I find no fault in him.

Verse 7: "The Jews answered him, "We have a law, and according to that law he ought to die because he has made himself the Son of God."

The charge was that Jesus claimed to be the Son of God. All their efforts to have Him crucified for being a troublemaker had failed.

If Pilate had any doubts before, he certainly knew now, that there were no legal charges against Jesus. There was no reason to charge Him with anything.

The Jewish law made it a capital offense for one to claim to be the Divine Messiah unless His claims were true,
(Lev 24:16).

Jesus sworn testimony that He was the "Son of God was true; He was Deity!

Verse 8: "When Pilate heard this statement, he was even more afraid."

Pilate had many fears; including, his relations with Herod, his reputation with the emperor, the outbreak of violence in his city, his wife's dream, (as mentioned in the other Gospels), and now, the claim by Jesus to be the Son of God.


Verses 9: "He entered his headquarters again and said to Jesus, "Where are you from?" But Jesus gave him no answer."

Again, some Romans were cynical about gods, but most believed in them, and Pilate seemed to be especially cautious.


Verse 10: "So Pilate said to him, "You will not speak to me? Do you not know that I have authority to release you and authority to crucify you?"

Pilate was near disbelief at Jesus' silence; also that any man would behave in such a manner, in his presence.

Pilate's decree was legally binding in all capital cases. His issue was not a matter of guilt or innocence, but concerns for the religious and political consequences of his decision. (The problems his judgment would cause him)

Verse 11:"Jesus answered him, "You would have no authority over me at all unless it had been given you from above. Therefore he who delivered me over to you has the greater sin."

The phrase, "Above" was a Jewish word frequently used by the Apostle John, when speaking of God.

Judaism understood that rulers held authority, only as delegated by God, and exercised under His permission. Jesus could have called for legions of angels; the tiniest display of His supernatural power could have turned Pilate into putty in His hands.

Verses 12: "From then on Pilate sought to release him, but the Jews cried out, "If you release this man, you are not Caesar’s friend. Everyone who makes himself a king opposes Caesar."

The Jews were using vicious political blackmail. If Pilate did not do their will, they would file charges against him before Caesar. These charges, whether true or false, could remove him from office. After hearing their threats, Pilate caved in and moved at once to have Jesus crucified.


Verse 13: "So when Pilate heard these words, he brought Jesus out and sat down on the judgment seat at a place called The Stone Pavement, and in Aramaic Gabbatha." (GAB-uh-thuh)

The "Stone Pavement," was a platform in the courtyard of the Praetorium, made of stones. It was ingeniously joined in a manner to form a throne-like platform, with steps and ornaments to add dignity to the decisions.

It was upon this judgment-seat that Pilate ordered Christ before him, for sentencing. Most commentators believe the governor had to pronounced death sentences from this judgment seat.


Verse 14: "Now it was the day of Preparation of the Passover. It was about the sixth hour. He said to the Jews, "Behold your King!"
Verses 15: "They cried out, "Away with him, away with him, crucify him!" Pilate said to them, "Shall I crucify your King?" The chief priests answered, "We have no king but Caesar."

The major theme of the history of Israel was that they claimed God as their true king. God had loved, tolerated, and protected them throughout their history. It was common knowledge that these people hated Caesar, yet now they say, "We have no King but Caesar."

Later, in the siege of 70 AD, Caesar reportedly crucified 30,900 of their young men on the walls, of the ruins of Jerusalem.

Verse 16: "So he delivered him over to them to be crucified. So they took Jesus,"

Pilate gave in and knowingly sent an innocent man, 'the Son of God,' to His death.

Concerning Pilate:
Some have tried to soften his role in the crucifixion by portraying him as a helpless victim of circumstances, imposed upon him by the Jews; but upon a closer look, we see a spineless leader.

Pilate ordered the scourging of Jesus, then sentenced Him to death, knowing that He was an innocent man.

Condemned criminals usually carried the horizontal beam of their cross, (not the upright stake), to the site. The victim was stripped naked for the procession and execution.

The most likely site for Golgotha was outside the city wall, perhaps a thousand feet from Herod's Palace.

This concludes our study of, "The Soldiers Mock Jesus."


Our next study Is: